One of the most memorable Seinfeld episodes is The Soup Nazi, much to the surprise of everyone involved. It is easy to remember all that is involved with getting the soup and of course the dreaded “No soup for you!”. However, there is another memorable part of this episode — the armoire thieves. 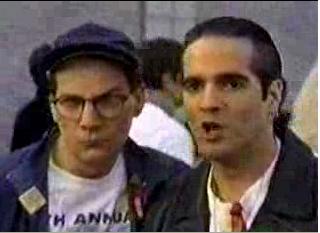 By any chance, do you recognize the gentlemen on the left? (I’ll give you  hint, he was a prominent character on a children’s television show.)

If you don’t know, don’t worry. I didn’t know either that is why I am posting the answer now. 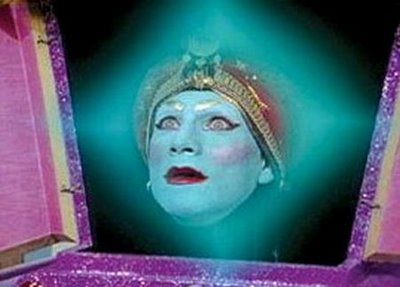 John Paragon as Jambi the Genie

Remember when there was more to look forward to Saturday than a day off of work? Remember when they meant something? Do kids today even know what they are missing?  Well I have been trying to bring some of the magic back on Saturday mornings by watching season one of Pee Wee’s Playhouse –  & it’s just like 1987 all over again.

Let me double check the credits to be sure… 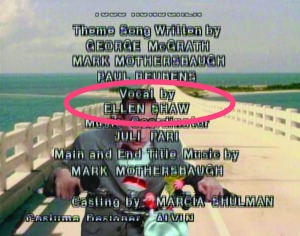 Ellen Shaw?  Seems confusing but she and Cyndi Lauper are one in the same. The strange part is, Cyndi Lauper doesn’t use the “Ellen Shaw” pen name for anything else and I haven’t found out why she used it here. I will keep digging and keep you posted on what I find. 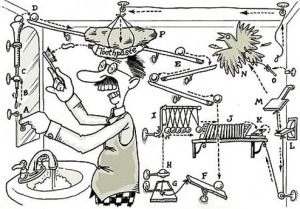 I don’t know about you, but one of my favorite scenes in Pee Wee’s Big Adventure is when he gets breakfast ready by turning on a fan and lighting a candle (thus beginning his Rube Goldberg machine). As a kid, I always thought that machines of that nature were a movie trick. I never knew that there was a name for them and that they can actually be made.

But who was Rube Goldberg?

Best known for his INVENTIONS, Rube’s early years as an engineer informed his most acclaimed works. A Rube Goldberg contraption – an elaborate set of arms, wheels, gears, handles, cups, and rods, put in motion by balls, canary cages, pails, boots, bathtubs, paddles, and live animals – takes a simple task and makes it extraordinarily complicated. He had solutions for How To Get The Cotton Out Of An Aspirin Bottle, imagined a Self-Operating Napkin, and created a Simple Alarm Clock – to name just a few of his hilariously depicted drawings.

and a cool little Honda commericial: