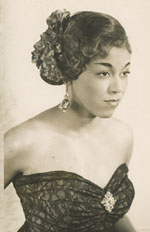 May I introduce, Rose Marie McCoy, one of the most prolific songwriters you’ve never heard of.

Rose McCoy grew up on a farm in Arkansas. But at the age of 19, she left home and moved to New York City to try to become a singer.

While she was waiting for her break as a singer, McCoy started to write songs, discovering that it came naturally to her. In the pop music world of the time, most performers relied on professional songwriters for their hits, and the entire songwriting industry was centered on one square block in New York City: 1619 Broadway. Better known as the Brill Building, the block housed a 10-story hit factory stuffed with songwriters, producers and music publishers.

After work, the Brill Building employees would hang out at Beefsteak Charlie’s. Many songwriters pitched there songs there and that is exactly the spot where Rose McCoy and her songwriting partner Charlie Singleton, set up their office (or should I say booth).

In 1954, McCoy and Singleton wrote a song called “Trying to Get to You,” which was first recorded by a black vocal group called The Eagles. Elvis Presley heard their version in a record store in Memphis, and he decided to record the song on his debut album for RCA Records in 1955.

Presley’s album spent 10 weeks at No. 1 on the pop charts.

Eventually she had a house, agreen Cadillac and her own office in the Brill Building, but she still worked for herself. She liked her independence and wanted to keep control of her music.

“I mean, she realized at some point in time that her power was in the pen,” Al Bell says. “And she was just one of those rare persons that wanted to be free to write her own songs and do what she wanted to do.”

Now 86 years, although retired, she is still writing songs.

My favorite South Park episode has got to be ‘Succubus’ from season 3.

The reason – Chef’s parents’ stories about the Loch Ness Monster and their repeated claims that they have seen him on multiple occasions, and are constantly harassed by him, as he tries to swindle them out of “Tree-fiddy” ($3.50). It still cracks me up to think of it. 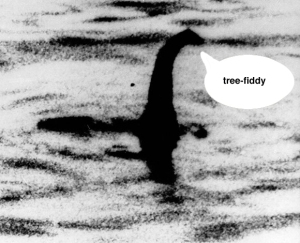 There are plenty of stories about Nessie and I am sure that you have your favorite too (or maybe not).

But there is somebody that you don’t really hear as much about, unless you live in upstate New York near Lake Champlain, I suppose. The “somebody” I am referring to is “Champ”.

The photo above was taken in 1977 by Sandi Mansi.

Thousands of people, dating all the way back to the Abenaqi Indians, claim to have seen the creature. This very deep lake lies on the border of New York and Vermont and is accessed by sea through the St. Lawrence Seaway. The first recorded sighting took place when Samuel de Champlain came upon the lake in July 1609. During this expedition, the French explorer noted “a 20-foot serpent, with a horse-shaped head and body as thick as a keg.” Since then, sightings of the strange aquatic beast have been reported by over 300 people.

Perhaps the most intriguing evidence for Champ’s existence came from underwater microphones installed in 2003 by a team doing research for the Discovery Channel. The team picked up a high-pitched ticking and chirping noise like what a dolphin or whale makes. Obviously these creatures would not be in freshwater, many miles away from the ocean.

I wonder if he would ask for a few dollars more…

It has been a project of mine this winter to see all the David Lynch films that I have yet to see. Well, last night I watched Eraserhead. What I want to bring up about this movie, is not the movie, but the story behind the movie and its cult status. (The funny thing is the movie and Lynch’s story about making the movie run about the same time).

Eraserhead was released in 1977 and thanks to Ben Barenholtz – it reached cult status. How you ask?

Because of Barenholtz’s NYC’s Elgin Theatre, (a movie house in dire need of repairs but at which played the non-studio and art films of the day) and by originating the “Midnight Movie” concept for cultists and the youth/college market.

Sure, the first few showings may have not been sold out, but Eraserhead ran in the ‘midnight movie’ circuit for 4 years and by then there were lines around the block. A job well done.