Life moves pretty fast. If you don’t stop and look around once in a while, you could miss it. 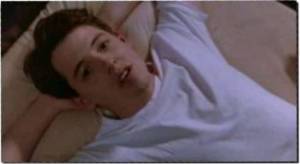 Well, it’s true and that is pretty much what happened to May for me. I learned many things that have either been integrated or forgotten, but with June,  I begin anew!

I saw a preview for the movie, Music Within, which is based on the true story of Richard Pimentel, the man who is credited with championed the Americans with Disabilities Act, into becoming law.

Here is summary of his life story as found on www.miltwright.com:

Richard Pimentel was pronounced dead at birth in the delivery room. In a miraculous turn of events, he lived. His mother, who had experienced three miscarriages before his birth, left him in an orphanage, unable to come to terms with his existence. After his father’s death, he was raised by his impoverished grandmother and deemed “retarded” by a school guidance counselor. He never spoke a word until age six.

After his mother abandoned him again for a new boyfriend, Richard was left homeless and roamed from friend’s homes to his father’s old workplace, a strip bar. He lived and slept in the dressing room. During these hard times, he managed to win two national high school speech championships and was offered a college scholarship by College Bowl founder, Dr. Ben Padrow. Richard arrived on campus only to hear Dr. Padrow tell him to come back when he had “something to say.”

Richard followed Dr. Padrow’s advice and quit school. Soon after he was drafted to Vietnam, where he survived a volunteer suicide mission and became an acknowledged war hero. During his brief celebration, a stray bomb exploded in his bunker and ravaged his hearing. Not only did Richard lose his hearing, he developed tinnitus, a constant ringing in the ears. The government dismissed his dreams of college and public speaking, insisting his fate was one of insanity and rage due to his condition.

Richard refused to accept this fate. He returned to college where he met Art Honneyman, “the smartest and funniest man he has ever known,” who just happened to have a severe case of cerebral palsy. No one could understand Art due to his wheezing, garbled speech—-except for Richard, who could hear Art’s true voice due to his hearing loss.

At 3 AM, in celebration of Art’s birthday, Art and Richard sat down in a local restaurant for a pancake breakfast. Their waitress threatened to call the police, deeming him the “ugliest, most disgusting thing” she had ever seen. They refused to leave and were arrested under the “Ugly Law,” a statute that prohibited public appearances of people who were “unsightly.” This injustice propelled Richard, with the help of Dr. Padrow and a host of friends, headlong into the nascent disability movement

The original title for the Alan Moore’s Watchmen was Who Killed the Peacemaker?

Read what I read on Atomic Gadlfy’s blog:

When writer Alan Moore pitched the idea for Watchmen to DC Comics, his working title was “Who Killed the Peacemaker?” By the time Watchmen saw publication, the character whose murder sets the events of the story in motion had been changed to an original creation of Moore and artist Dave Gibbons, the Comedian.

So who was the Peacemaker? He was Christopher Smith, a diplomat and avowed pacifist. However, unlike the pacifists I get into arguments with in bars, Smith understood that diplomacy sometimes fails, leaving you with no choice but to pick up a weapon and start shooting bad guys. And that’s exactly what he did, under the guise of the Peacemaker, “a man who loves peace so much that he is willing to fight for it!”

A friend of mine who works for an encyclopedia publisher shared this fact with me:

A device that dispensed holy water in a Greek temple in Alexandria, Egypt, in 215 B.C. is the earliest known vending machine.

To see how far vending machines have come, read about the one they call ‘Let’s Pizza’

Joakim Noah, of the Chicago Bulls, is not the only athlete in the family. 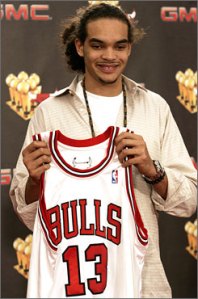 His father, Yannick Noah, was a professional tennis player and won the French Open in 1983. 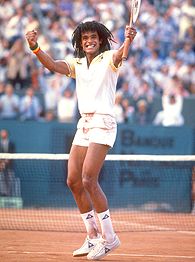 I am not sure if Joakim has the same musical aspirations, but Yannick is also a pop-soul singer. Who says you have  to the same thing your entire life?

One of the most memorable Seinfeld episodes is The Soup Nazi, much to the surprise of everyone involved. It is easy to remember all that is involved with getting the soup and of course the dreaded “No soup for you!”. However, there is another memorable part of this episode — the armoire thieves.

By any chance, do you recognize the gentlemen on the left? (I’ll give you  hint, he was a prominent character on a children’s television show.)

If you don’t know, don’t worry. I didn’t know either that is why I am posting the answer now.

John Paragon as Jambi the Genie

I will spare you, and not post a picture of this:

bezoar – A ball of food, mucus, vegetable fiber, hair, or other material that cannot be digested in the stomach. Bezoars can cause blockage, ulcers, and bleeding.

In other words, a hairball.

But I am not talking about a cat here.

Humans and cud-chewing animals, such as cows, oxen, sheep, goats, llamas, deer, and antelopes get hairballs or other types of “bezoars”.

“Bezoar” is a Persian word that means “protection from poison,” because bezoars were believed to be a universal antidote against poisoning. 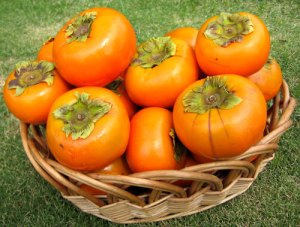 On a recent trip to the local fruit market I purchased a persimmon for the very first time. As you can see above, it’s not a friendly looking fruit, especially since it bears a strong resemblence to tomatoes, which are not one of my favorites.

Not knowing anything about the fruit, I was not willing to try it until I read more about it.

It’s important you know there are two kinds of persimmons: the Fuyu, the kind you can eat right away (thankfully this in the type I purchased), and the Hachiya, the kind you can’t. If you bite into an unripe Hachiya persimmon, it is if you just drank six cups of extra strength tea. This astringent flavor is due to the high level of tannin in the fruit, and there is a good chance that you would never try a persimmon again because it tastes so bitter. This would be a shame because ripe persimmons have an exceptional flavor and provide us with important nutrients such as beta-carotene, Vitamin C and potassium.

China is the largest producer of persimmons, followed by Brazil, Japan, and Korea. The United States grows comparatively few persimmons compared to the major producers, but virtually all, of the domestic persimmon crop comes from California.

Feeling confident that the persimmon I purchased was indeed ripe, I decided to try it (well, after my boyfriend tried it first). It has the texture of a peach and the flavor is somewhere in between a plum and a peach. So if you have seen this fruit and been afraid to try it, fear not!

Everyone hates them, that is for sure. But there is something that I am unsure about – why do we call them potholes?

First of all, not everyone calls them potholes, they are also known as kettles and chuckholes.

Second of all, if you read the definition of pothole, the reason it carries over to our roads is obvious:
a deep natural underground cavity formed by the erosion of rock, esp. by the action of water.
• a deep circular hole in a riverbed formed by the erosion of the rock by the rotation of stones in an eddy.
• a depression or hollow in a road surface caused by wear or subsidence.
• (also pothole lake) a pond in a natural hollow in the ground. 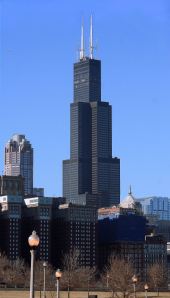 That’s right ladies and gentlemen we are talking about the Sears Tower, our nations tallest building. Why are we talking about it? Because the name is going to be changed to Willis Tower. Who names a building, Willis?

From the Chicago Sun-Times:

The 110-story Chicago giant, the nation’s tallest building, will be renamed Willis Tower under a leasing deal. The New York-based owners signed a lease with Willis Group Holdings, a London-based insurance broker, for 140,000 square feet.

“Having our name associated with Chicago’s most iconic structure underscores our commitment to this great city, and recognizes Chicago’s importance as a major financial hub and international business center,” said Joseph Plumeri, chairman of Willis Group Holdings.

blah, blah, blah. It’s hard enough to keep up with the names of stadiums, now we are going to have to keep up rnaming buildings too?