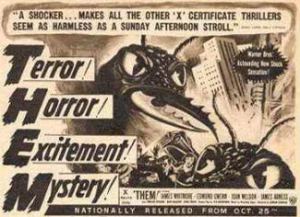 We used to think that giant radioactive insects would be the most terrifying intruder, but as it turns out the truth is more frightening than fiction (and the size of fleas). They are electronic-eating ‘crazy raspberry ants’ and they are making Texas their new home.

Billions of tiny reddish-brown ants have arrived onshore from a cargo ship and are hell-bent on eating anything electronic.

Computers, burglar alarm systems, gas and electricity meters, iPods, telephone exchanges – all are considered food by the flea-sized ants, for reasons that have left scientists baffled.

Crazy is the the right word. The ants are known as “crazy rasberry ants”: crazy because they seem to move in a random scrum as opposed to marching in regimented lines, and rasberry after a pioneering exterminator, Tom Rasberry, who first identified them as a problem.

Unfortunately, the ants also like to suck the moisture from plants, feed on precious insects such as ladybirds and eat the hatchlings of a small, endangered type of grouse known as the Attwater prairie chicken. They also bite humans – although not with a sting like fire ants.