It’s near the 1st of the month, mail is due…

After reading the title of this entry,  you may be scratching your head and wondering what in the world I am talking about. (or maybe not)

What I am talking about today is blackmail, where does the word come from and where would soap opera plots go without it?

This is the important part — Its origin had nothing to do with the post office, but it does have to do with rent…

Mail in this sense was an old Anglo-Norse term for rent or tribute. During the time of border warfare between England and Scotland, freebooters extorted payment from farmers of the area in exchange for protection and immunity from plunder. As the inhabitants were generally very poor, the tribute was paid in “black mail,” that is, grain, meat, or the lowest coinage (copper), as opposed to “white mail,” which was silver. In time the word took on the meaning of any payment extorted by threat of exposure of an incriminating secret.

It seems as though every other day there is a new report regarding vitamins. Should you take a multi-vitamin daily? My doctor says yes, certain reports say no. (or to be even more confusing, don’t stop, but don’t start)

If you take too many vitamins, studies show you may increase your chances of getting cancer or having a (second) heart attack.

However, if you are deficient in too many vitamins you could develop scurvy, rickets, or beriberi.

Beriberi is a nervous system ailment caused by a deficiency of thiamine (vitamin B1) in the diet. Thiamine is involved in the breakdown of energy molecules such as glucose and is also found on the membranes of neurons. Symptoms of beriberi include severe lethargy and fatigue, together with complications affecting the cardiovascular, nervous, muscular, and gastrointestinal systems.

There are 2 major types of beriberi:

At first, it was thought to from a lack of protein, but by 1901 it was discovered that it was indeed a (thiamine)B1 deficiency. To read more about beriberi, go here. 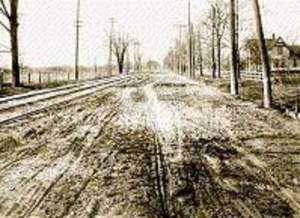 The first road to be paved with concrete was Detroit’s own Woodward Blvd. It was back in 1909, the same year Henry Ford introduced the Model T, so it was not the automobile industry that was requesting smoother roads — it was a group of bicyclists called, League of American Wheelmen, who had initiated what became known as the “Good Roads Movement.”

Roads at that time had otherwise been built with brick cobblestone or material called macadam, which was made of stone sprayed with tar to make it somewhat weather resistant (& didn’t last long).

is one of those inventions that I never really considered who invented it. (or cared, really)

I considered this for the first time while watching the documentary Paper Clips (naturally) which is not about the invention of the paper clip, but is about students in a rural town in Tennessee learning about the Holocaust. It is worth watching and you can learn more about here.

In that documentary, they mentioned the paper clip was invented in Norway.

However, if you google that information, you will find varying reports on the who, where & when it was actually invented.

Some accounts claim that the first patent was given to John Vaaler, a Norwegian inventor, in Germany in 1899. (As there were no patent laws in Norway at this time) In 1901, John Vaaler received an American Patent.

However, the Early Office Museum begs to differ…

Sigh, will we ever know the truth?

Talk About a Love Nest…

Take the time to watch this video, it will be worth it. Promise.

The Vogelkop Bowerbird (Amblyornis inornata), also known as the Vogelkop Gardener Bowerbird, is a medium-sized, bowerbird of the mountains of the Vogelkop Peninsula at Western New Guinea, Indonesia.

The bower is a cone-shaped hut-like structure some 100 cm high and 160 cm in diameter, with an entrance usually propped up by two column-like sticks. A front “lawn” of some square meters area is cleaned of debris and laid out with moss. On this, and in the entrance of the bower, decorations such as colorful flowers or fruit, shining beetle elytra, dead leaves and other conspicuous objects are collected and artistically arranged.

Did you ever wonder where the phrase “By Jove” originated from?

Well, I will tell you anyway…

Let’s start with the definition of Jove:

Jove |jōv|
another name for Jupiter

& a simple definition lead to a simple origin:

by jove is an exclamation of surprise. Jove is a euphemism for Jupiter, the Roman King of Gods. The Greeks call him Zeus. The expression seems first to have appeared in the 1500’s (Cassells). Putting it into a simpler way, it is like saying My God, By God, (in this case, by Jupiter.)

I suppose people in Boston are as familiar with this story as Detroit is with the 69 riots, but I have to say it again – HOLY MOLASSES!

Aftermath of the Disaster

The Boston Molasses Disaster, also known as the Great Molasses Flood and the Great Boston Molasses Tragedy, occurred on January 15, 1919, in the North End neighborhood of Boston, Massachusetts in the United States. A large molasses storage tank burst, and a wave of molasses rushed through the streets at an estimated 35 mph (56 km/h), killing 21 and injuring 150. The event has entered local folklore, and residents claim that on hot summer days, the area still smells of molasses.

getting older & wiser…
Blog at WordPress.com.