My brother just called me a few moments ago to tell me something that I didn’t know about the 1939 film The Wizard of Oz. 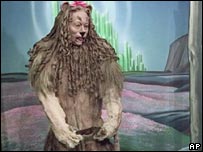 Bert Lahr as the Cowardly Lion

Making the costume for the Cowardly Lion was no easy task. Several attempts were made using synthetic materials, but these fabrics were difficult to light. They weren’t able to get the fur to look real enough.

At last a decision was made, use real lion fur.

That’s right, the cowardly lion’s costume is made of genuine lion pelts sewn together (a decision that would not sit well with many activists today.)

But I have to admit, it does light nicely…