Do you remember going through the Presidential Fitness Test in grade school?

Well, this topic came up at lunch today  and to tell you the truth, no one at the table (there were 7 of us) seemed to mind most of it (i.e. sit ups, push-ups, running suicides) – but the one thing that everyone agreed on as the most disliked part of the test was – the pull ups/chin ups.

Hmm…so it is still true that my little sister (who could beat all the boys in her gym class) is the only person I know that loved doing the pull ups/chin ups.

But, I am getting off track here. The follow up to this discussion was which president started this program?

Kennedy? That seemed like a good enough guess, that was until I learned otherwise …

We have this guy to thank: 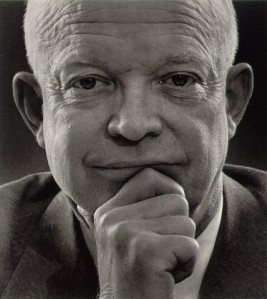 Here is a brief history of the program:

The President’s Council on Youth Fitness was founded on 16 July 1956 to encourage American children to be healthy and active children, after a study indicating that American youths are less physically fit than European children, by then President Dwight D. Eisenhower.

In 1963, President John F. Kennedy then changed its title to President’s Council on Physical Fitness to reflect its role to serve all Americans.

In 1972, the Presidential Sports Award Program was created.

In 1983, the United States Congress declared May “National Physical Fitness and Sports Month”.

In 1996, the Surgeon General’s Report on Physical Activity and Health was released.

In 1997, the PCPFS released its report on Physical Activity and Sport in the Lives of Boys.

And according to a New York Times blog, in 2008, The Presidential Fitness Test grew up.

Hmm, now I feel like I should be doing some sit-ups or something.